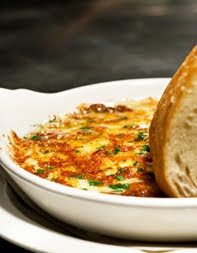 {photo and recipe from here}

As a child growing up in New Zealand in the seventies, I remember when friends of my parents had a fondue evening, which to me at the time seermed so fabulously sophisticated. Who would have thought, that some years later all grown up, I would be living in the Land of the Fondue....hence I smile as I write this.

I adore French onion soup so this recipe is one that I adore as it involves lots of cheese and onions. I hope that you enjoy it as much as I do.....

DIRECTIONS
1. In a large pot, melt the butter over low heat. Add the onions and cook over low heat, stirring frequently, until they are deeply browned, about 2 hours.
2. Using a wooden spoon, stir in the dry sherry, sherry vinegar, Worcestershire, thyme and a pinch of salt and pepper. Cook over low heat until the liquid is reduced slightly, about 2 minutes. Add the chicken broth and reduce slightly, about 5 minutes.
3. Preheat the broiler. Divide the caramelized onions between two shallow, heatproof bowls or serving dishes (such as gratin dishes). Cover with the Gruyère, dividing it equally between the dishes. Broil until the cheese is bubbly and golden brown, about 4 minutes. Garnish with the parsley. Cool slightly; serve with the baguette slices for dipping.