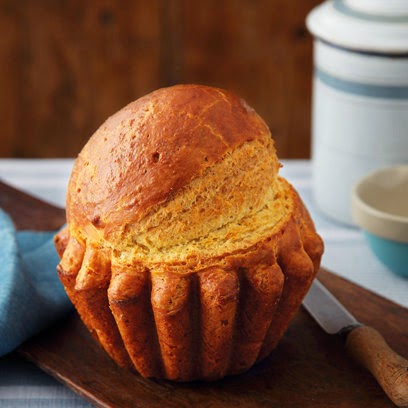 There is something about brioche and for me it is the fact that it literally melts in the mouth. Merci to the fabulous French for this wonderful invention....

1. Pour the milk and yeast into a bowl and stir to dissolve the yeast. Put the flour, one teaspoon fine salt and beaten eggs into an electric mixer fitted with a dough hook and pour in the milk and yeast mixture. Mix on slow speed to combine and knead the dough for five minutes.
2. Scrape down the sides of the bowl with a rubber spatula, then knead at medium speed for about 10 minutes. By this stage, the dough should be smooth, elastic and combined well.
3. Meanwhile, in another bowl, mix the butter and sugar together. Add a few small spoonfuls of the butter mix to the dough, then with the mixer running at low speed, add the rest a piece at a time.
4. When the butter mixture is all incorporated, increase the speed and work for six to ten minutes, until the dough is very smooth and shiny and comes away from the bowl with perfect elasticity.
5. Remove the dough hook, leaving the dough in the bowl. Cover with a tea towel or cling film and leave to rise in a warm place for about two hours, until the dough has doubled in volume.
6. Knock the dough back by flipping it over two or three times with your hand. Cover the bowl again and refrigerate for at least six hours (but not more than 24 hours). The dough is then ready to use and mould.
7. To shape a large brioche: divide 600g dough into two-thirds (400g) and one-third (200g). Shape the larger piece into a ball and place it in the bottom of a well-buttered brioche mould, measuring 16 centimetres across the top, eight centimetres across the base. Make a deep indentation.
8. Shape the small piece of dough into an elongated oval and gently press into the indentation in the large ball, so that only a little is left visible, resembling a ‘head’. Lightly brush the dough with egg wash. Leave to rise in a warm place for about one and a half hours, until it has at least doubled in volume.
9. Preheat the oven to 200C/gas mark 6. Brush the brioche lightly again with egg wash. Bake for 15 minutes, then lower the setting to 180C/gas mark 3 and bake for another 30 minutes. Leave the brioche in the mould for five minutes, then tip out onto a wire rack and leave the bread to cool before serving.
....bon appetit à tous, Leeann x
Labels: food