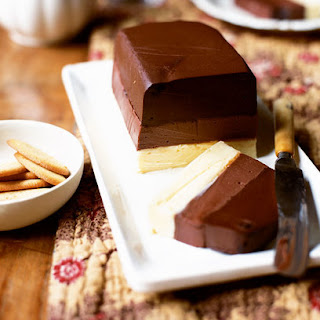 Photo and recipe from here

In honour of it being OUR day i.e. International Woman's day, I think that some chocolate is in order so today's recipe was created by the fabulous and very French Trish Deseine, one of my favourite French female chefs...

2. Break the dark chocolate into pieces and place in a bowl, plus 200ml cream (cold). Sit the chocolate over barely simmering water (the bowl should not touch the water).

3. Heat for two to three minutes, remove and stir, until melted. Return to the heat if not. Pour into the lined loaf tin and allow to cool, then place in the fridge for around an hour and a half, or until set. Each layer needs to set before you can start on the next.


5. You’ll be making the three layers in the same tin one at a time and chilling them as you go along.