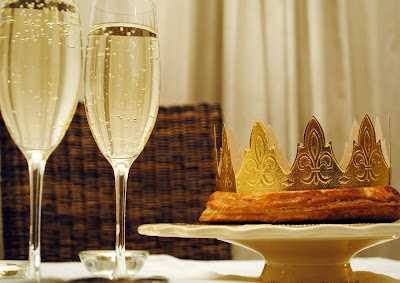 Bonjour from a chilly SW France,

I hope that you all had a fabulous weekend. This weekend we bought and ate the very yummy Gallette de Rois, that you can see in the above photo.

The Galette des Rois is an ancient tradition that refers to Epiphany which is a catholic tradition that goes back to the IV century. Every catholic church celebrates Epiphany on Jan 6. Before Christianity, this celebration was for the apparition of the Greek God Dyonisos who was attached to seasons, he died during the decline of vegetation and would resuscitate with the light. Basically, I think it’s called Twelfth Night in English referring to 12 days after Christmas.

Epiphany derives from Greek that means “event” and refers to the birth of Jesus. Epiphany refers to to acceptance by the Magi (The Three Wise Men) of Jesus being the Messiah.

Galette des Rois was starting to be popular already in the XIV century. Its round shape referred to the cult of the sun of the Saturnales, a pagan celebration. Galette des Rois is split into equal parts, you have as many parts as there are guests, with an extra slice for anyone who would drop by. Inside the galette, a “fève” (I think it’s called charm in English) is hidden, and the one who gets it, is the King and gets to wear the crown. This ritual goes back to Roman times when during a feast, one king was randomly picked by hiding a black or white coin in the food. The one finding it, would become king.

Fortunately I did not find the "feve" and think that it may have resulted in another trip to the dentist.
The one who finds the "feve" in his slice, gets celebrated king. All bakeries in France sell Galettes des Rois with a paper golden crown during this time of the year, so that the celebrated King can wear it. Then the king gets to pick his queen. Nowadays, its religious meaning has been a little lost, and everyone enjoys a good Galette despite its religion.

It is best served warm and the filling has a lovely custard-like texture and the pastry is fine. 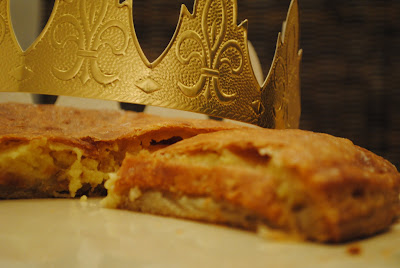 With champagne it is indeed a fabulous treat, fortunately they are only sold at this time of the year.

Wishing you a very happy and productive week (I have a list of things to do which is growing by the day as per normal).....