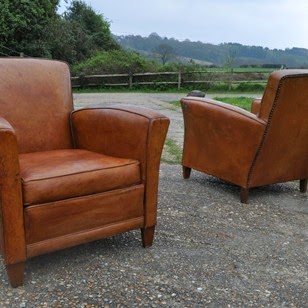 photo from here
Bonsoir mes belles,
It has been a very busy weekend and the week is set to be much of the same. We visited 5 vide greniers over the long weekend which were disappointing mainly due to the weather which meant a lot of sellers did not fancy getting out of bed to setup a stand as the weather forecast was predicting rain for most of the week-end. Friday we got drenched and we returned empty handed.
Yesterday luck was on my side and I picked up a couple of vintage club arm chairs which are similar to the ones that you see in the above photo. Unfortunately mine are in not as good a condition and I think that I may end up recovered the cushions and hope to save the rest.
I have not had a chance to take a photo as we have been busy with guests coming and going but hope to take a photo tomorrow.
Very exciting for me as I have been searching for a long time and they are expensive as everyone wants them as they are fashionable both here in France and abroad.
I saw them and paid quickly as there were three dealers behind me and told the seller that I would be back to collect.
When I returned there was quite a crowd of dealers admiring them so I am feeling blessed that I appeared just as the seller was setting up his stand...
Fingers crossed that I find more treasure this weekend coming....
très bonne semaine a tous,
Leeann - a very tired but happy kiwi living in la belle France xx
﻿
Labels: treasures