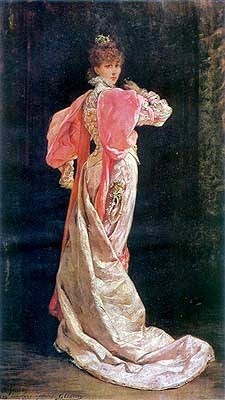 
Auguste Escoffier was a French chef and food writer who brought French cooking techniques to the world in the early 1900s. He simplified the elaborate style into methods that everyday cooks could use. He defined the five mother sauces - bechamel, espagnole, veloute, hollandaise, and tomato - that all modern cooks use, even if they cannot name them. Although Escoffier died in 1935, his techniques and recipes live on.

Bernhardt made her fame on the stages of France in the 1870s, at the beginning of the Belle Epoque period, and was soon in demand in Europe and the Americas. She developed a reputation as a serious dramatic actress, earning the nickname "The Divine Sarah."

Fraises Sarah Bernhardt.
(for 8 - 10 people) Using about 3 - 4 pounds  (500 grams) of fresh strawberries, remove the stems and put 2/3 of the nicest ones in a bowl, lightly sprinkle with powdered sugar.
Add 5 - 6 wine glasses of white wine (or sweet wine of choice) and chill.

Puree the rest of the strawberries and mix with about a cup of sugar (depending on sweetness of strawberries and taste) and add to the whole wine and strawberry mixture, reserving a few tbs. for the whipped cream.
Take a whole small ripe* pineapple and peel and core and then slice, then prepare a pulp of pineapple by roughly chopping or using a fork to pull apart or shred, canned pineapple in water can be used. Sprinkle the shredded pineapple with about a cup of sugar and reserve in the refrigerator. Prepare about 3 cups of cream chantilly or ordinary whipped cream and have on hand (if not making fresh) 8 - 10 cups of a good vanilla ice cream. To serve.Place a serving of vanilla ice cream in a bowl, flatten the ice cream then, using a slotted spoon, place over this some of the whole strawberries.  Cover this with a few tbs. of the shredded pineapple. Top with the whipped cream that has had a few tbs. of the strawberry puree  lightly folded into it.
Note the strawberry puree should be folded into the whipped cream in such a way as to produce an obvious mix of whipped cream and strawberry.Originally this dish had a lace of spun sugar over it and the original recipe suggests  the whipped cream and strawberry puree should resemble, or "give the illusion of a beautiful sunset."
Tip
*To pick a ripe pineapple pull on a leaf, if it comes off the pineapple with just a minimal effort it is ripe, if it come off too easily it is over ripe, if hard to pull off it is not ripe, pineapple do not ripen after picking. 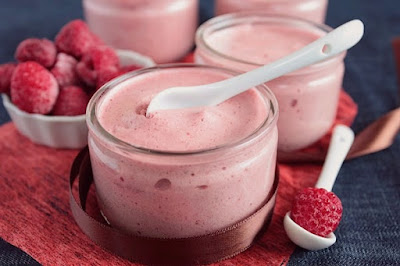