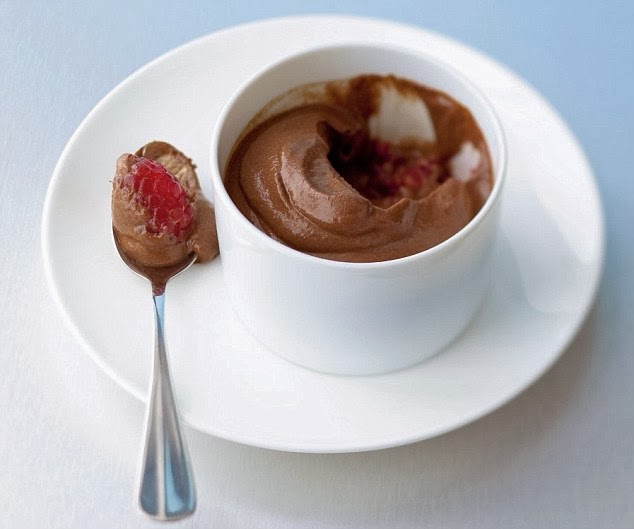 photo and recipe from here

I hope that you have had a fabulous week, ours has been another busy one and the paint is taking longer to dry than I thought so I have more planned for next week. Speaking on next week, St Valetine's Day is not far away so I am starting on menu ideas and this is one that I think would be perfect. It has two of my favourites...chocolate and rasberries, a very yummy combination.

Chocolate & Raspberry Mousse
♥ Break up the dark chocolate and gently melt it in a large bowl set over a pan containing a little simmering water. Leave the melted chocolate to cool for a few minutes. Beat in the egg yolks and then gradually whisk in the cream, rum if including and the sugar.
♥ Whisk the egg whites to stiff peaks in a large bowl using an electric whisk. Fold the whisked whites into the chocolate mixture in two or three goes.
♥ Drop a third of the raspberries into six 150ml · 5fl oz ramekins, about 4 in each. Pour over the chocolate mixture filling them to the brim – this is easiest using a jug. Place the ramekins in a baking tray (for ease of handling), loosely cover with clingfilm and chill for several hours or overnight until set.
♥ Serve the mousses with the remaining raspberries, either separately or arranged on top, and finish with a dusting of icing sugar if wished.