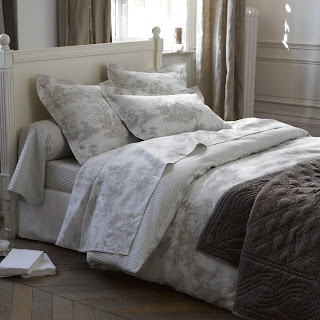 Bonjour from a sunny SW France,

If you are a fabulously french facebook follower you will know that I did a little shopping online at the weekend and I purchased the fabulous duvet cover and pillow cases, that you see in the photo above.

I decided that purchasing the whole set was a wee bit impulsive and instead I would pair it with a antique monogrammed sheet.

I said nothing to French Boyfriend and thought that it would be a nice surprise.

This morning French Boyfriend is flicking through the catalogue and stops at the page with.......this photo and says that he does not like a lot of the new toile de jouy designs (he is an antiques dealer stuck in the 18th century) but he likes the look of this design.

Thought that it was best to come clean and tell him that I did a "little" shopping on the internet and that it was scheduled to arrive this weekend.

Just hope that he is not present when my parcels arrive as I have not told him about the other items.....