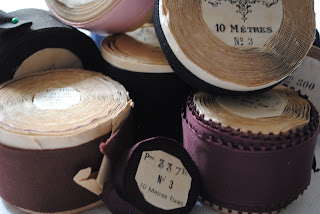 The heatwave is continuing and it is not expected to leave until next Friday so we are preparing ourselves for another week of extreme temperatures.

We managed a quick trip to a local vide grenier where I picked up lots of vintage rolls of ribbon or ruban as it is called in French.

The colours themselves are stunning but the thing I like most is the old style labels with their fabulous style of font and the way that each layer of ribbon is separated by a layer of paper. 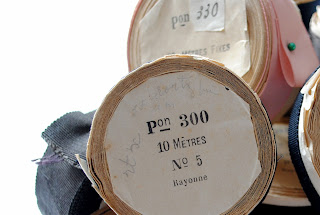 Love them and just wish  that the vendor had more as I bought all that she had as I adore ribbon and not only will the rolls look great when used as part of a display, they alwyas come in handy as I found out this morning when I wanted to make a quick change to my sun hat so that it co-ordinated with the rest of my outfit......it is a girl thing but French boy friend agreed that it looked better with a touch of black ribbon.

After treasure hunting we stopped quickly for a cafe and a macaron and I wished that I had my camera with me as there were no small macarons left and the only macarons on offer with rose flavoured and filled with fresh rasberries and a light cream........forgot to menetion that they were the large size so I shared it with FBF.  It was delicious and not too sweet and the rasberries were firm but melted in your mouth......my idea of heaven.......treasure hunting and macarons.....what more could a girl want......oh yes a French boyfriend.....la vie est vraiment belle en France!