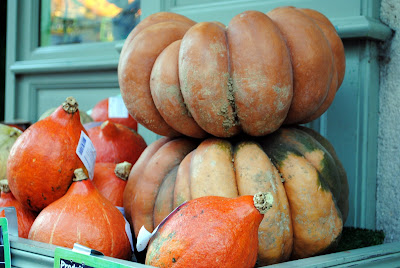 It is pumpkin season here in SW France and the village appears to be awash with pumpkins. Not forgetting that there is even a pumpkin festival taking place on Sunday morning in the nearby village of Issigeac.

Not forgetting of course, the game of the century when NZ take on France in the final of the Rugby World Cup, could get messy at our house as obviously FBF will be supporting France and I being a kiwi, will be hoping that NZ are at their best, enough said on this subject!

Back to business......here is this week's recipe, hope you enjoy it as much as we do!

Pumpkin Soup, Baked in a Pumpkin

2. Spread the bread cubes on a baking sheet and toast in the oven about 8 minutes.

3. Using a sharp, small knife, cut out a 3 or 4 –inch circle from around the pumpkin stem and set it aside. Scrape out the seeds and loose stringy bits using a large metal spoon or your hands.

4.Put the pumpkin in a roasting pan and sprinkle ½ teaspoon salt inside. Arrange a layer of the toasted bread on the bottom of the pumpkin.

5. Stir together the broth and crème fraîche. Add the remaining teaspoon salt, nutmeg and pepper to the mixture and stir again until dissolved.

6. Pour about a third of the broth over the bread, followed by a third of the cheese. Continue layering twice more and top with the bay leaf. Replace the pumpkin top and carefully place in the oven.

At this point, take the pumpkin out of the oven and gently poke it with a skewer or the point of a knife – there should be very little resistance, but should still hold its shape. If it still feels a bit firm, put it back in the oven and test it at 15-minute intervals until if feels done – try not to over cook so that the pumpkin doesn’t start to slump or cave in. There goes your tureen.

To serve, carefully spoon out some broth, bread and pieces of pumpkin (you have to scrape the sides a bit to break up the flesh). As you get toward the bottom of the pumpkin, some liquid might begin to leak out – keep the pumpkin in the pan or another large bowl just in case.

Serves 10-12 depending on how hungry you are.