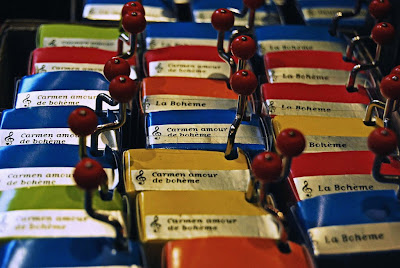 .........almost as much as I adore these La bohème music boxes.
What a fabulous word as it conjures up an image of being free and wild.
Since the 16th century, the French word bohémien was used to refer to gypsies, based on the erroneous belief that they come from Bohemia.
As gypsies are associated in the common imagination with a wild and free life separate from rigid society, the name came to be associated with the counter-culture of young artists and other rebels in the Latin Quarter of 19th century Paris.
This was a common colloquial term in Paris, when Henri Murger used it in the title of the stories which eventually became the basis for the opera.
The fame of Murger's stories carried the term to the world beyond Paris and into other languages, such as English, where "bohemian" has a similar connotation.

The word bohème denotes the place where these bohemians live, and thus translates to "Bohemia". When referring to the geographic region, the preferred French spelling was (and is) Bohême, with a circumflex. Murger encouraged the alternate spelling of bohème, with a grave accent, to specify the conceptual Bohemia he wrote about. In the preface to Scènes de la vie de bohème he wrote, "La Bohème, c'est le stage de la vie artistique; c'est la préface de l'Académie, de l'Hôtel-Dieu ou de la Morgue."
("Bohemia is a stage in artistic life; it is the preface to the Academy, the Hôtel-Dieu [principal hospital in French towns], or the Morgue.)

Although Puccini's opera is in Italian, it was given a French title, shortening Murger's title to simply La bohème.
A literal translation of this would be Bohemia but in the poetic sense of the word, not the geographic. (It has sometimes been rendered in English as The Bohemian Girl, possibly under the influence of Michael Balfe's opera of that name, but that is erroneous. The Bohemian Girl (or gypsy girl) would be bohémienne.)
Today I feel like being a bohémienne - do you want to join me?
L x
Labels: french words