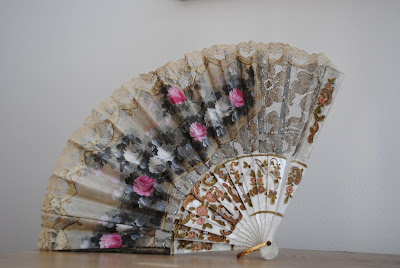 There is something about antique hand fans (eventail in French)that I adore and the more that I read about them, the more interested I become.

I found a fabulous one yesterday that dates back to the 1880's and am sure that it could tell a tale or two.

In earlier times hand fans were used to communicate. And in fact, the role of the fan was not only for cooling, or as a fly swatter or fire-bellows.

It was also the supreme instrument of silent communication.

As Sir Richard Steele, in the “Tatler” of 4 August 1709, wrote: “You may observe in all public Assemblies the sexes seems to separate themselves and to attack each other with eye-shot, that is the time when the fan, which is the armour of woman, is of most use in her defence, for our minds are constructed by the waving of that little instrument, and our thoughts appear in composure or agitation according to the motion of it.”

In earlier times, an infinite variety of meaning could be found in the motion and flutter of a hand fan. Some examples:


Carrying in the right hand:You are too willing

Carrying in the left hand, open:Come and talk to me

Carrying in the right hand, in front of the face:Follow me

Carrying in the left hand, in front of the face:Desirous for acquaintance

Clasping the hands under the open fan:Forgive me, I pray you

Cover the left ear with the open fan:Do not betray our secret

Drawing through the hand:I hate you

Drawing across the cheek:I love you

Drawing across the eyes:I am sorry

Drawing across the forehead:You have changed

Dropping the fan:We will be friends

Gazing pensively at the shut fan:Why do you misunderstand me?

Letting it rest on the right cheek:Yes

Letting it rest on the left cheek:No

Placing behind the head:Do not forget me

With the little finger extended:Goodbye

Open and shut:You are cruel

Placing it on the left ear:I wish to get rid of you

Presented shut:Do you love me?

Presenting a number of sticks, fan apart, opened:At what hour?

Shut fan held to the heart:You have won my love

Shut fan resting on the right eye:When may I be allowed to see you?

Threaten with the shut fan:Do not be so imprudent

Touching the unfolded fan in the act of waving:I long always to be near you

Touching tip with finger:I wish to speak to you

Twirling in the left hand:I love an other

With handle to lips:Kiss me

I am not so sure that the silent language is for me and am sure that had I been alive in the 1880's a fan may have landed me in all kinds of mischief but in the other hand may have been easier than replying in French.

i.e. how many languages do you know where you can say I love you and then add an additional word and it means I like you a lot

On that note I am off to do my French homework,
L x
p.s. If anyone wants to practise, I have the antique and also fabulous French fan listed in my shop....
Labels: fan