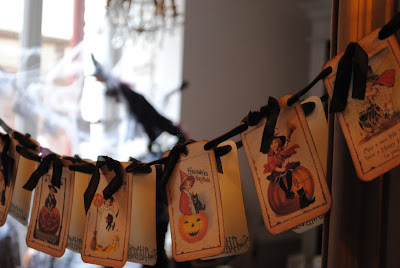 Happy Monday....where did the weekend go to? Before I knew it, I was waking up to Monday morning. Monday morning is like Sunday in our village as many of the shops close on a Monday and there are not a lot of people in the street. This has taken me a while to get used to after living in large cities but it is something that I have slowly become accustomed to.

The village is gearing up for Halloween and there is going to be a parade through the streets of the village next Friday morning, with small children dressed in their scarily best, which will end at the local chateau which being a ruin is scarey at the best of times.

I have decorated my wee boutique for Halloween and we even have a pumpkin that lights up in the window, I just need to remember to turn it on and a witch dangling from an antique chandelier...... 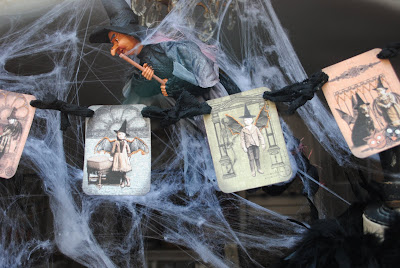 We had finished hanging cobwebs etc when in popped a customer who wanted to buy chandelier so this is my second attempt.... those false cobwebs are a lot harder to remove than real ones as I found out and ended up cutting the chandelier free.

What are your plans for Halloween, are you doing anything special?